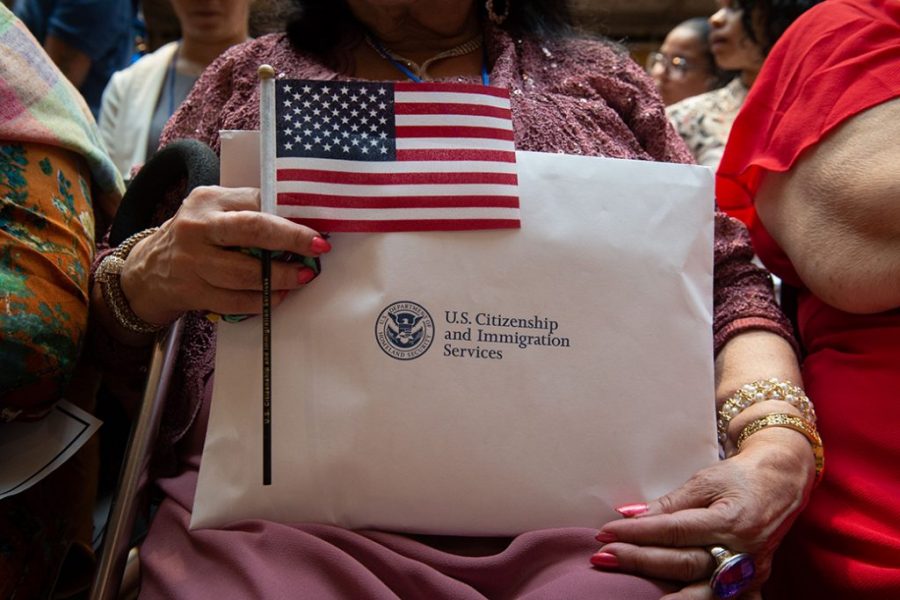 Photo credit: Getty/Bryan R. Smith Trump's "Public Charge" Will affect an Immigrants ability to get a Visa or Green Card

Anxiety peeks, precautions are always taken, the fear of being pulled over haunts CVHS junior Rebecca every time she gets in the driver’s seat. Every time she passes a stop sign, every time she runs a light, every time she goes a mile over the speed limit. These are all mistakes for which she can be pulled over and subsequently, her family deported. Mistakes that could rip her family apart, leaving her alone and isolated from the only home she knows. This serves as a reminder for Rebecca that her family is unwanted and insignificant she is in the one country that may be her only hope for greater opportunities.

“I only have my mom, single mom, you know and she’s an immigrant so she doesn’t have papers so like when she drives me to school like she doesn’t have a license any papers several licenses like so we like run the risk like every morning like getting stopped by cops and them taking your instance as you know,” Rebecca said.

The new Public Charge policy is just another reminder for Rebecca that her family is unwanted here.

The new Public Charge policy was planned to take effect Oct 15th across several states, but federal judges have temporarily blocked the new rule. The new legislation would broaden the definition of a public charge and what qualifies an immigrant as one. The new legislation changes a non-citizen’s ability to apply for a visa or a Green Card. If immigrants use Medicaid, SNAP (food stamps), TANF (Temporary Assistance for Needy Families), or housing programs 12 times in 12 a month period, or even if the government believes they are likely to, this will hinder their ability to obtain a visa, green card, or citizenship. Lacking English proficiency, having a medical condition, and being low-income could also hurt immigrants’ applications.

Rebecca’s mother cannot get the education she wants, the house the family needs, because she lacks papers. Her mother is also unable to get any type of healthcare because of her legal status. Healthcare is so vital to so many Americans, from saving people money, and overall helping people get the best medical attention that they can receive.

For CVHS senior Karla Gales, she and her family realize they have to choose between their health and staying in the country. For her family, applying for Medicaid could mean the loss of opportunities for legal status here in the U.S..  Under the new Public Charge proposal, immigrants applying for green cards or visas also have to prove that they have healthcare within 30 days of their trial. If they do not, they are considered ineligible when applying for green cards or visas because they would be considered a public charge. On top of this, Karla must be separated from her father who is back in Mexico processing his papers.

“Well, I mean, they told my stepdad that he would have to go back to Mexico because his papers, like he needed papers to be there and all that. So right now he’s over there and there’s the processing of papers and all that, but it’s taking a long time” Karla said.

Carolina and Rebecca are both in constant fear that a police officer will pull them over, causing their families to be sent back into dangerous conditions. For them, the opportunities for a better future would cease if their families were sent back.

“We were fleeing the Narco territory we lived in. Since we were students, we were being targeted for sex trafficking and to become drug dealers” said Carolina, whose family is from Mexico.

“They were really poor (referring to her mother and her family) in Honduras and there was barely any food, and the house was really dangerous because of gangs,” said Rebecca, whose family is from Honduras.

Like Carolina and Rebecca’s family, many immigrant families come to the U.S. for refuge from dangerous conditions. They come for a better life. But upon first entry, to the U.S., they get a taste of the country’s attitude towards new immigrants.

“People used to be able to get to the border and apply for asylum, while they were waiting to be approved because they do not get approved at the spot. They have to wait for dates, so they wait at detention centers. The people didn’t know how many days or what was going to happen inside the detention center. So once they got the date, they could leave detention centers. They could take showers, eat and communicate with families,”volunteer for Social Ministry Houston Shirley Marin said.

Now under the Trump administration, they can no longer do that. According to the American Civil Liberties Union (ACLU), asylum seekers are now held in detention centers with conditions that are not regulated. Detainees have no access to soap, toothpaste, or places to wash their hands or shower. Reports expose that children have been sleeping on concrete floors and adults have to stand for days due to lack of space. Both Rebecca and Shirley Marin have had either family or friends in these detention centers. For Rebecca, it was her uncle.

“My uncle got caught and they put him in a detention center, where they beat him up and starved them,” said Rebecca.

With the many fears that high-schoolers already have about going to college, Carolina has an added fear.

“ The fact that I can’t basically dream of being a teacher or a lot of other things because of my legal status makes it really difficult to even want to graduate college with a degree,” said Carolina.