From the Silk Road to Houston’s WHAP Students 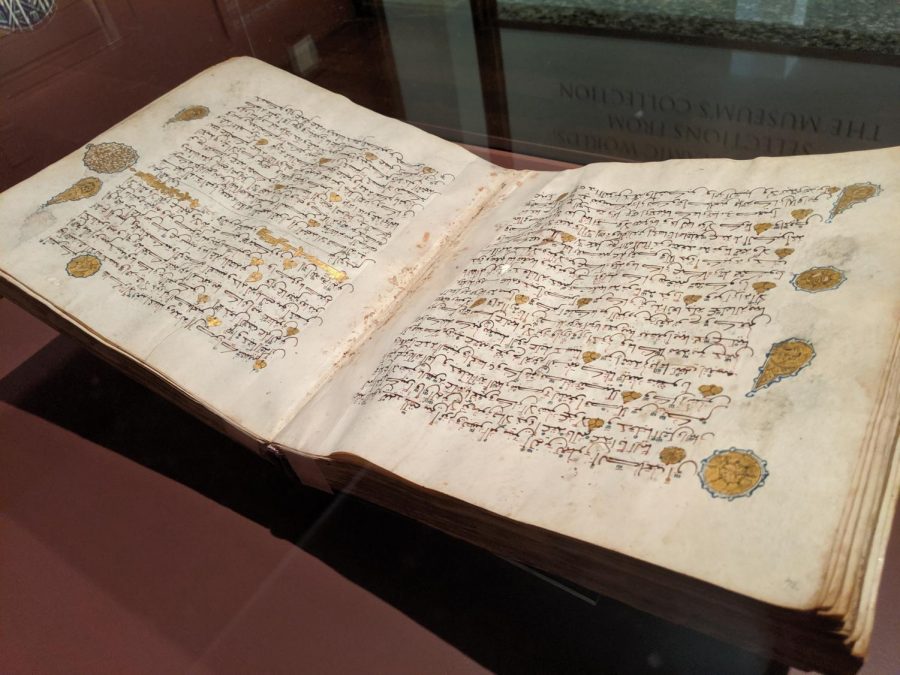 The Moroccan, a Qur'an Manuscript

“Arts of the Islamic Lands” is currently exhibiting at the Houston Art Museum until the end of this year. Having learned about medieval Islamic culture in World History, I decided to stop by. When I arrived, I found myself in a trance, unable to look away, the elaborate designs. I was filled with fascination, fueled by the geometric patterns, the repetition of flowers, and the script that decorated each and every piece, specifically the pottery. It all had me wondering, what does all of this mean? What was happening during the 12th and 13th centuries when the pottery is dated?

In the Islamic culture, calligraphy, geometric patterns, and florals are all principle ideas rooted in the Qu’ran, the holy book of Islam. These principles define the creative aspects and artistic goals of the followers of Islam. In the Islamic culture, there are theological restrictions on the depictions of the living. Take calligraphy, for example, calligraphy in the Islamic culture is a way to celebrate god without the usage of people and animals, which is represented in Arabic writing. It is held to the highest regard to Muslims because Arabic was the language in which the Qu’ran was revealed to the prophet Muhammad. Making calligraphy the holiest of writing, because it conveys the beliefs of the Qu’ran.

Take this work, for example.  The Al-Shifa Al-Sajjadiyya is a collection of supplications and whispered prayers composed by Sajjad, the Prophet Muhammad’s great-grandson. It is a prime example of the importance of calligraphy in religious texts. The classic style of illumination with golden specks, combined with the elegant yet legible calligraphy, is considered one of the most reverent ways to write religious text. Calligraphy can also be found on pottery, quoting Qu’ran text.

Geometrical patterns are also extremely important in Islamic art. The main reason for its prominence is due to the restriction on the depiction of living things, as well as the rise in the popularity of science during the Islamic age during the 8th to 14th centuries. This aniconism, or the absence of material representation of both the natural and supernatural world, forced artists to explore non-figural objects as a mathematically-based design. Geometric design was believed to reflect the language of the universe and assist readers in their reflection on life and the wonders of creation. Created during the Islamic golden age, scientists, mathematicians, and artists from all over Europe would flock to the Abbasid empire.  The Abbaside Caliphate became the center of learning. Knowledge about India, China, and ancient Greece was brought to a single place and significant contributions to mathematics, astronomy, philosophy and art were made here. The Al-Sahifa Al-Sajjadiyya is emblematic of this art, with its repetitive geometric designs almost seeming to be a reflection of images.

All three of these principles are found in all Islamic art, especially pottery. Islamic medieval pottery thrived during the Islamic golden age. Cities like Kashan were important centers for high-quality pottery and tiles, bathed in riches, because of the Silk Road. Does this sound familiar to all of you WHAP students? During the period known as Pax Mongolica, the Mongols served as protectors of the silk road and brought a time of relative peace and prosperity. As history goes to show, periods of peace lead to the flourishing of culture. During this time period, pottery became more refined. Designs more elaborate.