RED Is The Word 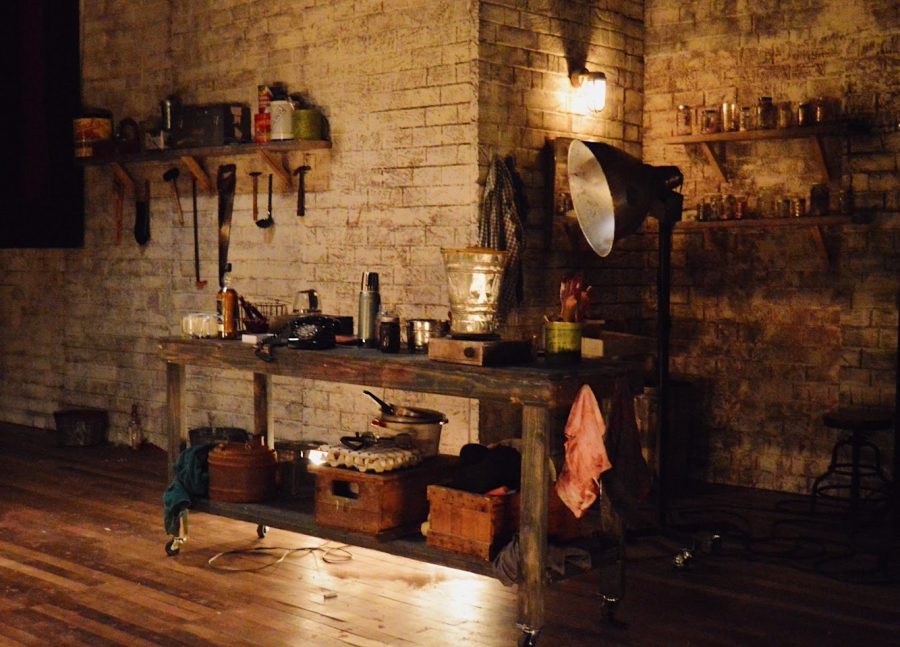 “RED,”- the play that will spark  conversation and make you think about art’s meaning. Quietly opening on Friday night, it gets right into a deep conversations between the artist Rothko and his apprentice Ken- “The Color is RED and RED is the color.” But what is RED? It’s a shade, an emotion, a meaning, something that is interpreted in different ways to different people. Accordingly, the play presents two characters with their own views on the beauty of art.

Rothko is an artist working in his studio in NYC. He tries to show his apprentice Ken and others how they should view art, how people need to think about it. Rothko explains the meaning of color and the process of making art.

First produced in 2009, “RED” by John Logan was not altered by the Carnegie Theater Co. and and stayed true to the original, besides the omission of explicit language. The play dramatic, but confusing at times. It’s great to start conversation and give you different ideas and viewpoints on not just art, but life.

Not only do we explore the meaning of art, but we get to see the relationship of two artists during their most prolific periods. Ken struggles to gain respect and learn Rothko’s ways. Rothko is always harsh, and making jokes. Rothko wants people to think when they see art, but he doesn’t like the idea of change. For example Rothko doesn’t like Pollock because he changed his form of art when he became famous.

As usual, Carnegie Theatre Co. technical prowess showed in the production of this play. Unlike Faust, their last play, RED is set in one location. With this scenario, a lot more details could be brought to life. The brick walls of the studio were made of styrofoam, but you wouldn’t be able to tell the difference between a real brick. There was a real wood floor and a suspension system for the art canvases. 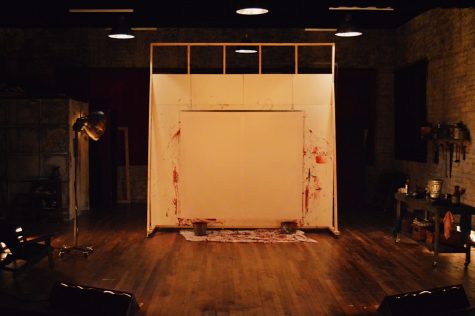 For props, there were things you would find in an actual studio- canvases, paint brushes, sinks, and other art supplies. Lighting played a big role too. The lights were dimmed to capture a focus on the artwork. One thing I vividly remember was one piece of work that showed a black canvas with two red stripes. As the lights dimmed the black inclosed on the red lines, but if you looked away the effect would start over. Classical music was played to intensify and project the feelings of the play. Sometimes it was calm other times it was dramatic, as in Rothko’s different painting.

The play starts off with Rothko viewing his artwork, then Ken, his apprentice enters. They talk about art, but Ken is often questioned by Rothko and finds it hard to have a voice. Ken talks to Rothko about his big project, which is having art put in the Four Seasons restaurant nearby the studio. They go on and on, it gets a bit hard to listen too at times. In the end Rothko expresses how no one is good enough for his art. He asks for his painting back from the Four Seasons restaurant and argues a bit more with Ken. Preparing for his suicide, he fires Ken.

Freshman company member Jonathan Hernandez showed a great amount of confidence playing Rothko. His voice was loud and clear, and presented dominance, an important trait of Rothko. His character was put together with expertise. The gestures, ragged clothing, the brooding jokes, and anger were all prominent through Hernandez’s performance. Ken was played by senior Trey Pokorny. Even though he was considered “less” than Rothko and was merely a student, I wish his character would’ve been slightly tougher. Ken was always taking hits from Rothko and I wish Ken would have had a slightly rougher voice and tone when responding back. But Pokorny portrayed this belittled and battered apprentice effectively.

Throughout the play it was fun to hear conversations about art and grasp a better understanding of Rothko’s life and work. There were many beautiful elements to this play. I still wish for a more plot-drive play, something audiences were probably expecting, but didn’t find in RED. Carnegie Theater’s Co’s production of RED was enlightening, but perhaps, young audiences would prefer being entertained, rather than enlightened.