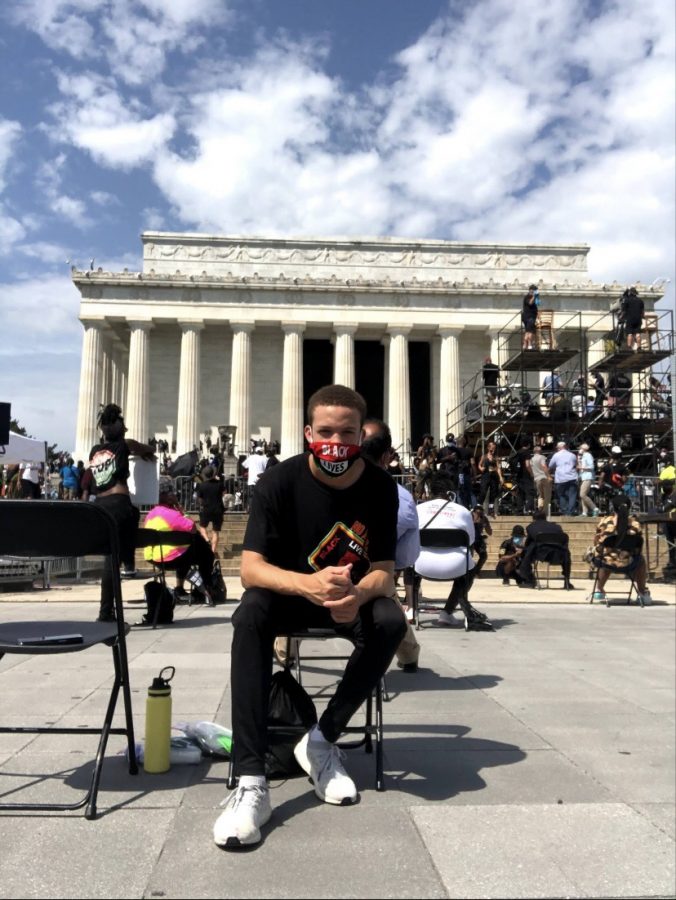 By Ashley Becerra and Talia Moghnieh

Black Student Union president, junior Ashton Brown, was only about 9 years old when the 17-year-old African-American Trayvon Martin was shot and killed by vigilante police in 2012. At that time, he and his family lived only a town away in Miami, Florida. At that time, he did not imagine that the incident would spark the Black Lives Matter movement. Nor, did he imagine that a few years later, he would be joining the cause in protests and marches from Houston to Washington, D.C.

“I first heard about the Black Lives Matter movement in 2015, after the death of Trayvon Martin. I remember that my parents and all my family members were talking about it, and they were extremely nervous because it happened in Florida. I didn’t really understand how things like police brutality and racism really worked because I was in elementary school so I wasn’t really thinking about those kinds of things,” says Brown.

The first time Brown attended a Black Lives Matter protest was this past summer after the police racially-motivated killing of Houston native George Floyd.

“A specific event that sparked it was, of course, the murder of George Floyd. Seeing the video that you know everybody’s seen, of the officer kneeling on his neck, really affected me emotionally, and it made me both sad and angry. Sad because you know this is someone’s life, someone who’s lost their life, a mother who’s lost a son, you know, a child who lost a father,” said Brown.

Growing up, Brown and his family have never been immune to racism. More than 50 years after the Civil Rights Movement, Brown’s family was even denied service in a public place.

“Sometimes my parents have gotten turned away from eating in places. There’s a specific story, my aunt one time, she was trying to go to this restaurant, and she was with one of her friends who was a black guy. I think he was wearing Jordan shoes. And the place said that they would not allow him in because the Jordan shoes didn’t ‘go with the dress code.’ So they literally turned his service away, but they let pass, non-black people who weren’t wearing dress shoes,” says Brown.

Even though the racism Brown has experienced is not mostly overt, it is implicit in how he is sometimes treated differently from others.

“Sometimes when I’m walking into stores, I get watched, you know, because people think I’m going to steal something, or I assume that that’s why they’re watching me. There’s plenty of times where I’ve gotten kind of that subliminal [message] but never anything outright. I’ve never been outright called the N word or something like that, or told that I can’t do something because I’m black but, but there’s been those kind of low key implicit examples,” says Brown.

Brown notes that racism is not only manifested in racist attitudes, but also embedded in systemic inequalities in income and education, inequalities that fall along racial lines.

“My mom had to work really, really hard for me to get to Carnegie, because if not,  I would be going to my zoned school, which is, not funded the same as Carnegie and it’s a majority black school. Because it’s in a majority black neighborhood, they are less likely to be funded,” says Brown.

Over this past summer, Brown attended all the local Houston Black Lives Matter protests in the wake of the killing of George Floyd, but then decided to take a step further in joining a national movement with others fighting around the country against police brutality and for racial justice in the March of Washington, which took place August 28.

“It felt very much like a bioclastic mural. We were all there under similar purposes for these similar reasons, and although it was a bad reason that we had to get together, for a murder and an unjust murder, but the fact was that we were all there to make our voices heard, to speak out about something. and that made it more of a community event,” Brown says.

Brown recalls his favorite speech during the event, a speech that a shed light on the community impact that is felt with each incident of police brutality.

“So at one point there was this lady and she was talking about George Floyd and she was saying how he was calling for his mother at the last moment of his breath. He wasn’t saying, ‘I hate you Officer,’ or cursing or anything. He was saying ‘Mama, Mama help me.’ It was really powerful for her to be talking about that, especially because she was saying that she would hate to have her child call to her in his last hours, or last minutes. It really moved me, because I think the the black female perspective is overlooked in this whole thing. You usually see black men being killed and then so it’s like police officers hate black men but black men have black mothers and black sisters and black aunts and cousins and you know the pain that’s being felt by the community is felt among black women,” says Brown.

At times, Brown recalls, peaceful protestors were met with violent actions from the police.

“I actually got a bruise on my rib, because of how hard the police officer pushed me with his nightstick because we were trying to protect that lady who they [the police] had pushed. There was no reason to push her to the ground; she wasn’t going to be able to do anything to the officer.”

Violence was met with violence as protestors released pent-up anger.

“So some skateboarder I saw trashed a police car, like completely destroying it. They were taking their skateboards and hitting them against the windows. People were throwing rocks and stuff. I think it was very symbolic of how people felt because people are angry and that’s why they were out there. So I thought that was really almost, cinematic, the way that it was happening,” says Brown.

At the end of the day, participating in the protests from Houston to Washington D.C. made Brown part of a larger community and historical struggle for racial justice in this country.

“We were connected by George Floyd and all the people who have died from police brutality and racism in this country.”