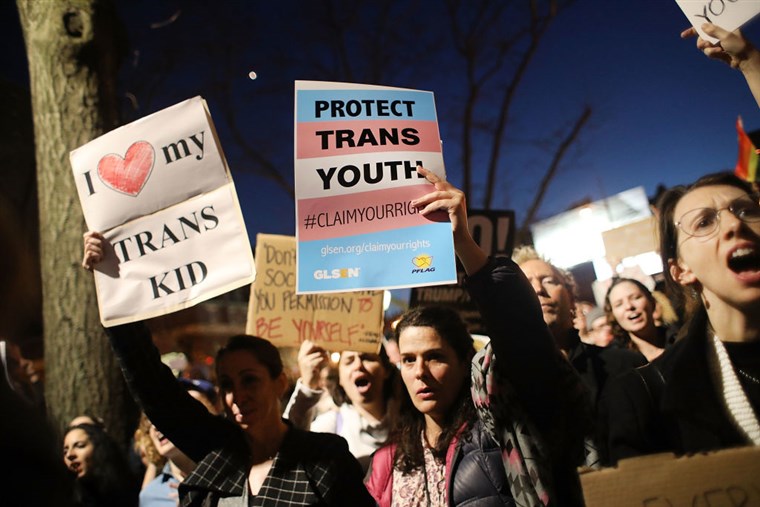 Students protest to protect the rights of transgender students on the anniversary of the Stonewall Riots.

By Abigail Nunez and Amy Maya

Since the start of this year, dozens of bills have been introduced in states across the country prohibiting healthcare for transgender youth and excluding them from athletic programs.

Back in 2011, the Houston Independent School District passed non-discrimination protections that include gender identity, gender expression and sexual orientation. In 2016, the district reinforced federal protections for transgender students against discrimination in the use of restrooms and locker rooms.

Individual schools in HISD have also taken their own actions on transgender students rights. The Straight Gay Alliance (GSA) is a student run club in Cesar E. Chavez High School, which provides a safe place for students to meet, support each other, talk about issues related to sexual orientation and gender identity and expression, and work to end homophobia and transphobia. In addition to support, some GSAs work on educating themselves and the broader school community about sexual orientation and gender identity issues.

Another example would be the Sharpstown High School LGBTQ+ Student Organization. The Sharpstown LGBTQ+ Organization’s mission is to provide safe place for LGBTQ+ students to ask questions, attend events, learn about resources, and create friendships.

“Trans students have a much higher risk of being bullied, and many don’t feel safe being themselves at school. I’ve heard of teachers refusing to respect student’s names and pronouns, of students being denied care and help because they are trans,” said transgender student and former CVHS student Elias.

However, Elias considers himself lucky to attend CVHS, where he highlights that the campus population is more inclusive of transgender students.

“I’ve had to deal with my fair share of unsolicited and invasive comments and questions, and little microaggressions from people. But, that being said, I have never felt unsafe on campus because I’m trans. I know that there are many adults at Carnegie that I can fall back on if I am facing issues. But I also understand that just going to an accepting school like Carnegie puts me in a certain position of privilege, and not everyone has a school environment that is conducive to their journey,” said Elias.

Elias feels that the district still has a long way to go and needs to be more support services in place for transgender students.

“Honestly, from what I’ve heard, crisis networks lack education and awareness in most places. It would also be really helpful if being trans, and just being LGBTQ+ in general was at least touched on in sex-ed classes. Honestly, just in education in general. Another subject that is severely lacking in representation for trans people is history – we hardly ever get to hear about those who came before us, which can be very isolating and also frustrating. So in short, we need better education, not only in our classes but for the people who are supposed to be there to support us as students,” said Elias.

Providing gender-neutral bathrooms on campus would lessen some of the anxiety that I felt when I first came out, and that I know a lot of other trans people feel,” said Elias.

According to Elias, showing that transphobia is not tolerated on campuses can go a long way to helping transgender students feel more accepted.

“A lot of the time, trans kids feel like it’s us, alone, against the world. And while we shouldn’t have to feel this way, it’s often true. In short, it’s nice to say you love and accept us, but what we really need is for you to show us that you love and accept us, and that you’re there to support us, not just for “inclusivity points.”