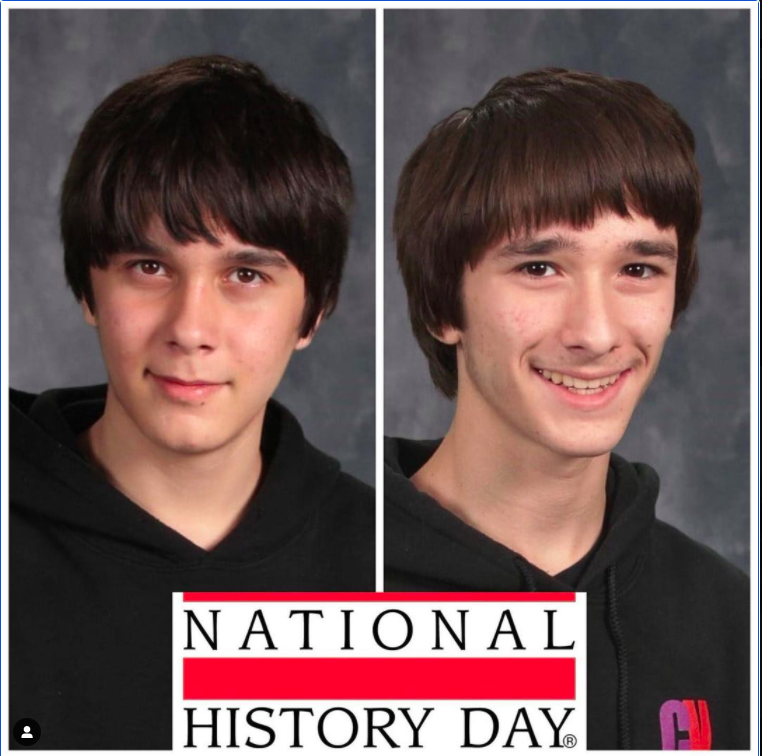 Courtesy of Davidn and Ronald Rauch

A rehearsed monologue, a revised paper, or a riveting documentary? These are just three of the five project styles that National History Day Competition participants undertook in the regional competition two weeks ago, in a contest to determine the most creative product, inspired by the theme: “Communication, a Key to Understanding.” CVHS Juniors David and Ronald Rauch’s projects proved to be the most communicative, as both took home first place in website creation and performance, respectively. This was Ronnie’s second year taking home first place in regionals, and David’s first time competing, ever.

The twins’ success at the competition obviously holds true to the nature of Carnegie students, and their ability to achieve academically. However, it might also hint at some existence of a more mystic link between the two; a mental synchronicity allowing them to coordinate for mutual benefit in endeavors of the mind. Individually, each twin is a marvel of intelligence and mental profundity, but together, might they be an unstoppable force of twin power?

“I was looking for activities for us to do at the History Club and I found out about National History Day. I thought, huh, that’s cool. So, we decided to try it,” says Ronnie, the older of the two.

The Rauch twins base their origin as leaders of Carnegie’s History club, where they satisfy their vigorous interest in history, and got a jump start on enrolling in the competition. Deciding to try it came with a lot more provocation than Ronnie humbly lets on. David explains his motivation behind participating:

“I was going to read up about [the topic] anyway, and it was a perfect excuse for me to learn all about what I wanted to learn, without saying that I’m wasting time instead of studying for other classes, you know,” says David.

David’s focus was a topic shrouded in political opinion and ideological conflict: the Cold War. Why would a high school junior choose such a complex and elaborate topic? Well, David has an ancestral connection to this part of history:

“I’ve always been interested in this era, because I have family from the former Soviet Union,” David explains. “My project initially started as a study of the communication in the Soviet Union and propaganda there, however I had run into a major roadblock in the fact that my Russian ability is limited. As I was reading, I had seen a lot of sources about American propaganda and thought, ‘I can read this language,’ so I shifted my focus to that. At first I was unsure, but then once I read about McCarthyism and the way that, for example, constitutional rights were infringed upon during the trials, I found it kind of cool and I was actually interested. So I did some reading and expanded my project.”

Ronnie’s topic was more classical, a study of the Enlightenment era in Europe. A similarly ideological time period, notable for its lasting and impactful writings and works of art.

“The Enlightenment, which was an intellectual movement that put the focus on freedom and liberty, and basically inspired the American Revolution,” Ronnie explains, “wasn’t just adopted by revolutionaries; they were also used by people like Catherine the Great, who was a super absolutist. A lot of times the ideals of the Enlightenment are used to actually take away people’s rights, instead of protecting their rights and freedoms. I found it ironic, especially because it happens still today.”

The two projects were from different eras, different locations, and had different creators, yet David and Ronnie were able to find the corresponding element between them.

“Like my brother brought up, during the Cold War trials and the Red Scare, they claimed to be protecting freedom, even though in reality they’re taking them away,” Ronnie says.

While both the brothers showed enthusiasm for this learning opportunity, they simultaneously lamented over the lack of representation their topics receive in regular class.

“A lot of times they don’t mention stuff in our textbooks,” Ronnie says. “That sounds kind of dystopian, but it is actually depressingly true: there’s a lot of events that were not so good, that isn’t so much mentioned in our textbooks, that should be.”

“I enjoyed this period of history as a whole,” David says, “but we’ve never really learned about it in history class, until APUSH, so I was excited to cover some new ground, and see how all of this affects us today. All the things we’re learning are all very relevant in national politics. For example, at the end of my project I talk about how something that President Joe Biden has said in a speech this February, 2021, echoed some things that I’d read about from that time period.”

Not only in national politics is history relevant, according to the twins, but in the progression of life in general.

“History explains why things happened, why things are, and how things will probably turn out in the future,” says Ronnie. “Learning about what we did wrong, what other people did wrong, is really important.”

“Also,” David continues, “it’s impossible to learn from the mistakes of the past if you don’t learn about the mistakes first.”

It was at this point that the exchange evolved, so that it was no longer a reporter-subject interview about a competition, but a philosophical discourse about the significance of history on the present and the future. It was almost as if the twins did not need interview questions, but were able to continue the conversation on their own. This now irrelevant reporter was intrigued to be able to bear witness to the miraculous workings of the twins’ tandem minds.

“When you’re little, you imagine the founding fathers to be these great geniuses that made up democracy, when in reality, that isn’t true, and it promotes this ideal of American Exceptionalism. In reality, you know, we’re a lot more connected to the rest of the world than we like to think,” Ronnie says.

Before continuing to his following point, David applauded his brother for the use of a historical vocabulary term, “American Exceptionalism.” Although in a teasing manner, this seemed to be part of a game the two play, to challenge and encourage one another. Most brothers give each other nougies and wet willies–the Rauch brothers keep each other sharp.

“It also is very important to understand the context of where people could be coming from, and why the world is the way that it is,” says David. “You cannot escape history, even if you say that when you go to college, you’re going to major in engineering and never touch a history class, beyond what is required to graduate, you’re still going to encounter the ramifications of history, whether or not you know that it’s happening. Understanding what is happening and having informed opinions and intelligent conversations about history, helps…”

It is important to note that at this point in the discussion, David falters, losing his train of thought. Almost immediately, Ronnie comes in, finishing David’s point and building on his own:

“To put it one way,” Ronnie says, “I think it helps emphasize how connected the entire world is: ideas, thoughts, goods. The world’s really interconnected. So I think that’s something that history helps properly highlight.”

The dynamic colloquy between David and Ronnie, where minds were stimulated and new understandings reached, gave an insight into the abilities of these prodigious and erudite twins.

If they were hoping to conceal their extraordinary ability of mental connection, the Rauch brothers were unsuccessful. It was a marvel to engage in discussion with the two competition winners. One would hope that they use their twin powers for good. Their willingness to share and encourage learning for all, gives this reporter confidence in that.

“If you have a passion or issue that you want to explore, there’s always something you can dig from history. You can always find something in any topic that you’re interested in, there’s always something to learn, always a lesson to take from anything that’s happened in history. Take the lessons that you learn in history, and you can apply it to today, even when you check your phone for a news headline, you can understand the context of everything a little bit better, world or domestic,” David says.

The twins will be moving on to the state level of the National History Day Competition on April 28. Be sure to wish them the best of luck as they represent our school.