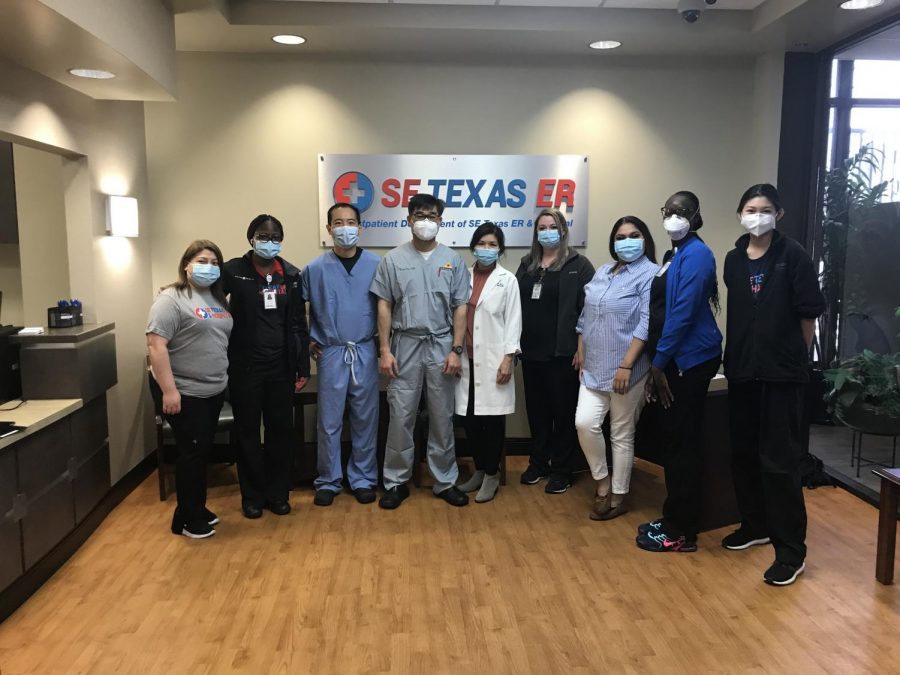 CVHS junior Maia Vo stood in black scrubs, behind her mask. They were baggy and bore the swishing static of synthetic cotton, but to the coiling line of awaiting faces that greeted her and her parents outside SE Texas Emergency Room that morning, the uniform signified a beacon of promising authority. Vo’s arrival finally brought their disquieting wait for the COVID-19 vaccine to an end.

“We thought we were early, but then there was this huge line,” said Vo, “It was apocalyptic.”

With vaccine rollouts pipelining from the federal to state governments, Vo now dedicates her weekends to assisting her parents with vaccine distribution at their emergency room, SE Texas ER, which functions under their hospital consortium, Nutex Health, and provides emergency assistance to Houston’s Spring Valley enclave. While the ER is not a direct vaccine hub, they periodically receive surplus shipments from designated hospital vaccine hubs to which they may provide COVID-19 immunity to their local community and personnel.

“Mostly, it’s staff and their family members, or people that we know that work in healthcare, like dentists. There are a lot of people that are healthcare workers who are not associated with certain hospitals, and they are left out. Small doctor’s clinics, dental clinics, or even optometry; they still see patients. Those were our priority,” said Vo’s mother, M.D. Kim Vo.

Vo managed the rolling crowd. Standing behind the front desk, she co-managed directing traffic and consistently organizing and dispensing patient paperwork for the Moderna COVID-19 vaccine. While doors opened from 8:30 A.M. to 1 P.M., patients significantly surged within the first hour and a half. Vo roughly estimated that 50% of their 200 pre-registered patients arrived to receive their vaccination within the first hour.

“It was kind of like Black Friday, but as a pandemic,” said Vo.

As of April 4th, 2021, the New York Times reports that 15.7% of Texans received full vaccinations, with 27.9% having received at least one dose. Johnson and Johnson’s single dose vaccine accounts for both single-shot and full vaccination data within these statistics.

Nationally, President Joe Biden extended his initial quota of 100 million vaccination shots administered to Americans to a 2-for-1 deal of 200 million by his 100th day in office as of March 25th, 2021. At a reported rate of 3 million shots delivered per day, Biden intends to hit his target by April 30th. If the rate of shots given per day remains consistent, Biden will have his 200 benchmark met from the current 165,053,746 shots administered in approximately 12 days, fulfilling his deadline by April 16th.

Even armed with prior experience volunteering for the ER with similar quantities of people, Vo never encountered directing crowds with such intensity before. The job called for careful assertiveness with crowd control, which required sticking to a script that Vo mentally developed as she carried out her interlaying tasks.

“I feel like I can work well under pressure, so it wasn’t too bad for me,” said Vo.

Arriving at the ER for vaccinations was a predominant trend of elderly ages, often accompanied by their children. Even though the vaccine would ultimately strengthen their immune systems, fear and anxiety hung noticeably present.

“A lot of people worried that they wouldn’t get their vaccine. I think that was scary for them, and then you could see some people were taking their parents. It was surreal, because a lot of people looked really sad,” said Vo.

Yet, the slump of wearisome waiting noticeably dissipated into smiling faces as families and patients sat in the waiting room post-vaccination, visibly relieved.

“This one lady gave us Bánh tét. It’s a Vietnamese food covered in banana leaves, and she gave it to me and my dad because she was so grateful that we were able to vaccinate her parents, said Vo.”

Vo fully intends to continue assisting the front lines as Nutex receives more vaccines from upperhand hospitals. As she finishes off her high school years, Vo sees a future pursuing a medical degree, broadening her ability to prioritize and provide emergency assistance, and creating a lineage of health professionals within her family.

“People are going to need help. It’s not something that’s going to go away. People are always getting hurt, and one more person could be able to help,” said Vo.