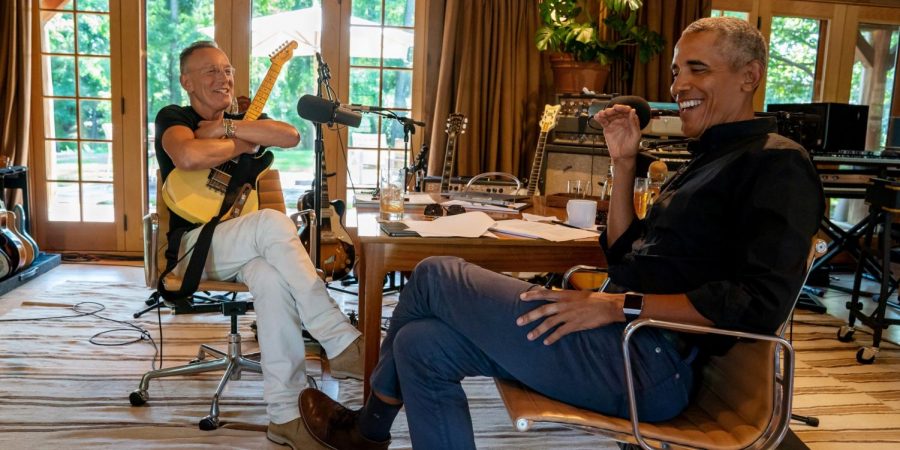 Race is a delicate subject in the United States. Since the end of the explosive Civil Rights and other social justice movements of the late 60’s and early 70’s, American society has grown hesitant to discuss racial issues. Many feel they are unequipped, uninformed or unqualified while others believe political discussion leads to nothing more than rancor and argument. This has removed current events from being a topic for “polite” conversation. This is the case especially in current times, where race seems to be at the forefront of almost all the matters broadcasted to us on a daily basis (police interactions, public health, winter storms).

However, we have been presented an opportunity to quell this apprehension, in the form of a podcast, hosted by two men more parallel than I originally believed. These two men come from working class backgrounds, growing up in areas of the country whose realities were somewhat overlooked. Both men were able to achieve prominence nationally and internationally, and through their ascension, became symbols of hope for Americans everywhere. Despite the similarities of these two figures, there is one difference between them: their race.

President Barack Obama and music legend Bruce Springsteen collaborate on a podcast titled, Renegades: Born in the USA. In the particular episode which I listened to, the topic was “Race Relations in the USA.” In listening, I appreciated its conversational format, which was necessary to make a large and somewhat jagged topic more digestible for the common listener. I found myself impressed at the speakers’ ability to incorporate some of the heavier details, even if they were presented in a simple manner. My eyes were not particularly opened, nor was my thinking shifted in any significant way, but there were some good points of discussion.

Before listening, my expectations were not in the mountaintops. I am a diehard Obama fan; he will always be an extreme inspiration and role model to me. However, because of the position he’s in, at times he can be compromising in his opinions, in an effort to prevent offending or even confusing the people that listen to him.

When discussing the matter of reparations, Obama gives insight to his understanding of the call for retribution for those descended from slavery.

“If you ask me, theoretically, ‘Are reparations justified?’, the answer is yes. There’s not much question,” Obama states. “The wealth of this country, the power of this country, was built in significant part, not exclusively maybe not the even majority of it, but a large portion of it was built on the backs of slaves–”

“The White House–” Springsteen reminds him.

“They built the house that I stayed in for a while. What is also true is that even after the end of formal slavery, and the continuation of Jim Crow, the systematic oppression and discrimination of Black Americans resulted in Black families not being able to build up wealth, not being able to compete, and that has generational effects. So if you’re thinking of what’s just, you would look back and you would say, ‘The descendants of those who suffered those kinds of terrible, cruel, often arbitrary injustices deserve some sort of redress, some sort of compensation — a recognition.’”

President Obama, while making a strong point to the necessity for reparations, also attempts to sum up years of the Black experience in a short explanation that seems intended to inform, as well as evoke feeling and reflection.

His co-host Springsteen then asks him, “How do you as president, knowing all of the above, push or prepare the nation for something that feels, as you say, ‘so justified’?”

It’s at this point that Obama is forced to make the concession. He admits that his administration was not up to the task of making strides in securing reparations, and attributes it to governmental gridlock and disagreement among the general public. In my opinion, he made the politician’s response.

“It’s perfectly understandable why working-class white folks, middle-class white folks, folks who are having trouble paying the bills or dealing with student loans, or don’t have healthcare, and they feel like government has let them down, wouldn’t be thrilled with the idea of a massive program that is designed to deal with the past but isn’t speaking to their future,” he says.

I understand that that is the nature of being a President, and that it was once his job to represent all Americans. However, he was once the editor of Harvard Law Review (first Black one, at that), and a Constitutional Law Professor. These accolades lead me to expect profound, intellectual discourse from him when he’s engaging in discussions, similar to what I received from reading his book, The Audacity of Hope. What I heard instead was more surface level, glossing over complex topics, which on their own contain multiple arguments and implications. I would have received more from this podcast had it taken a more analytical approach, rather than present an introductory and unembellished look at the contradiction that is race and race relations in this country.

Despite these criticisms, I realize the purpose was not to impress this cynical student reporter, but to introduce the general population to topics like racism, tokenism, and police brutality–topics they probably do not usually concern themselves with. This was their way of bridging the gap, and bringing those topics into “polite” conversation. Those already aware, myself included, were most likely not the target audience. I commend President Obama and Mr. Springsteen for opening this dialogue, and pitching it to the people underhand, nice and easy. I know that I will be waiting in anticipation for that in depth, reality-altering, mind-blowing, perception-shifting discourse from the former President, which will hopefully come quite soon.