A legendary fight decades in the making: Godzilla vs. Kong 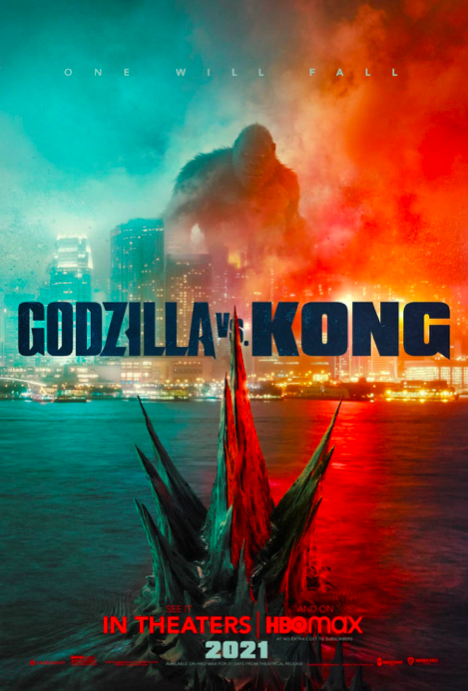 By Alexandra Silva and Jonathon Morales

Two alpha creatures, one fight, one winner. Godzilla, the king of all monsters. King Kong, apex predator and protector of skull island.

Clashing worlds together, Legendary Entertainment acquired the rights to both Kong and Godzilla, along with other side-character monsters, and decided to make this amazing movie.

Beginning in 2014, the first movie in this thrilling franchise is of course, Godzilla. This movie consists of many fight scenes between the newly discovered MUTO character that had been found feeding from a nuclear plant for 15 years. In the fight, Godzilla proves his strength and wins against MUTO.

The movie to watch following this is Kong: Skull Island. In this film, a team of scientists and military people are left stranded on the island.

Trying to find a way out of this dangerous place, they find a village of people who have lived on the island for years under the protection of Kong. The military still think that Kong is a threat and try to kill him by burning his body in flammable materials then blowing him up with explosives. The budget for this film, 185 million, left lots of room to fulfill appealing visual effects, making it as though you were in the movie yourself. Following this intense scene. Kong narrowly escapes death and still protects the people from the skincrawlers (threats to island people). The movie ends with a climactic scene of the team escaping the island and leaving Kong on the island so that he can live in peace. Overall, the storyline interlaces with thematics beautifully and left me on the edge of my seat the entire time.

The last movie to watch before Godzilla Vs. Kong is Godzilla: King of Monsters. As you can probably tell from the title, this movie consists of many monsters that are, of course, overpowered by Godzilla. Through fighting the monster, Ghidarah, and proves his might to the audience and to the other titans who now respect Godzilla’s dominance.

Getting to what the fans were most excited about, the ultimate battle. People expressed who they were routing for on twitter with the hashtags #TeamKong or #TeamGodzilla.

Knowing the background, we can get into the what we’ve all been waiting for, Godzilla Vs. Kong. Since the beginning of the movie, it is evident that Kong wants to go back home because he does not like where he is at. As the movie progresses we find out that the little girl can speak to Kong through sign language. He signs to her that he wants to go home. When they are trying to take him home, a battle ensues. The moment we’ve all been waiting for.

After cinematic scenes of the battle between the giants, Kong is ultimately defeated and left to lay in the ruins of the city after the fight. His heart rate is slowing and he is about to die when the deaf girl who converses with Kong notices. She alerts people and they defibrillate him with a huge shock from one of their vehicles. This scene was as heartwarming as it was nerve racking, leaving the audience holding their breath until Kong is brought back to life.

Mechagodzilla (a robotic titan) began destroying the city and fighting Godzilla, Kong helped and used an Axe to fight off the robot. Godzilla who was beaten down and weak helped by charging the radioactive axe with his lazer roar and Kong was able to defeat the mechanical beast by immobilizing it. The movie ended with Godzilla and Kong leaving each other peacefully, with Kong going back home and Godzilla returning to the ocean.

Overall, the film was everything we had hoped for and more. With the amazing film style that they used for the film, the eye catching animation, action packed fight scenes and intricate story line it is definitely a must watch. We give Godzilla vs Kong a perfect 10/10, a thumbs up to the movie crew, and categorize it as a must watch and encourage everyone to watch it. *Available on HBO Max or in theaters*