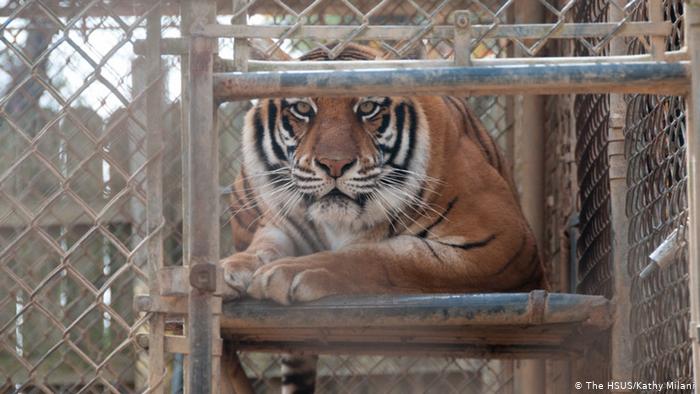 On May 9th, a Bengal tiger was seen thousands of miles from its natural habitat when it appeared on a Houston lawn, only to disappear days later.

The 9-month-old male tiger, named India, was found again on May 17th, a few days after it had been initially spotted getting into a SUV with its supposed owner, Victor Hugo Cuevas, who was out on bond at the time.

India is now living in the Cleveland Amory Black Beauty Ranch in Murchison, Texas, where he will be receiving a half acre of land, complete with an appropriate environment and diet.

However, this doesn’t alleviate the fact that India was on a Houston lawn where he could’ve caused severe damage to himself and nearby residents. How did India get to Houston in the first place?

Currently, in order to own a tiger in Texas, you need to register it with the state. However, many people do not do this and, because there is no law prohibiting the private ownership of tigers (as well as most other exotic animals), many people have “gotten away” with owning tigers.

Licenses can also be necessary for animals such as bears, coyotes, chimpanzees, and most other apes; however, there are no laws regarding other exotic animals, including monkeys, wolves, lemurs, capybaras, and a few others.

The laws currently in place for keeping exotic animals allows for some people to find a workaround in order to keep these animals. In order to end situations like India’s, where the tiger was found in a place where it could have harmed people or have been harmed itself, we need to end private ownership of dangerous exotic animals.

An estimated 3,900 tigers are left in the wild, meanwhile, there are approximately 5,000 tigers in captivity.

Owning exotic animals is much more than a hobby like most think. It’s a lifestyle, considering the amount of change you need to make in your life, as well as the cost. Making a single mistake with your animal can lead to extreme amounts of damage to you, your home, your family, and your exotic animals.

The care itself for exotic animals ranges from simple terrariums to entire acres of land fully dedicated to housing your pet.

I have had the opportunity to care for a few exotic animals, from lizards to snakes, and own a few of my own as well. I spend about 30 minutes everyday just caring for my animals, and while that doesn’t sound like too much time, it can increase depending on the animal you have. You may be spending 4 hours every day just cleaning your animal’s cage, replacing its food and water, and still have to spend another hour of your time playing with it so that it gets the enrichment it deserves.

For example, the capybara – the largest living rodent in the world. According to Spruce Pets, capybaras need 12 feet by 20 feet of land as well as an enclosure for the night. On top of that, they also need a pool that is deep enough for them to swim/wade in, or more than 3 feet deep. The list of housing requirements continues, to the point where keeping a capybara seems absurd.

However, capybaras are not the most outlandish exotic animal that people keep. As mentioned before, some people keep tigers (surprisingly, even more frequently than capybaras).

Tigers need acres upon acres of land considering they roam miles in their natural habitat, as well as daily interaction and feeding.

Tiger cubs will need to eat 5% of their body weight daily in order to remain healthy, and considering that tigers can grow to upwards of 680 pounds (this varies greatly on the gender, age, etc.), the cost of food alone is considerable and most likely more than most people can comfortably afford.

The daily enrichment that tigers require also adds another factor to this already lengthy itinerary of tiger care – the danger.

“Tigers have been known to escape from zoos and private properties and have killed people they come across mainly because, in captivity, they associate humans with the delivery of their meals.” says the Spruce Pets in their tiger care guide.

Every time you interact with your hypothetical tiger, you risk yourself being mauled, bitten, scratched, or worse.

According to The Seeker, it only takes about 4,000 newtons to break the average human femur.

However, let’s say you’ve gone over countless care guides, you’ve contacted the right people in order to get a permit, and you’ve set up your enclosure for your tiger. Now it’s time to bring your hypothetical tiger home.

The exotic animal trade is ruthless, with an uncountable amount of abuse and neglect happening to its animals. It’s incredibly difficult to run a store that sells, profits, and takes adequate care of its exotic animals considering the rigorous amount of time, money, and space required.

Despite this, it isn’t uncommon to find exotic animals. Even chain stores, such as Petco and Petsmart, sell exotic animals, like ball pythons, which can both bite (non venomous) and constrict, as well as Tokay geckos, an aggressive gecko with a strong bite force, capable of making you bleed.

All of the animals will need their own significant amount of care, an amount that a chain pet store simply cannot provide.

Because of how accessible these stores are, it makes it all the times easier for inexperienced and unprepared people to come and buy these animals, making it more likely that these animals will go to homes where they are neglected and die.

As someone who owns and cares for exotic animals, I think there should be a line drawn between “exotic pets” and “wild animals”. Some animals need to stay in the wild, and restrictions on these animals should be much more limiting than they are.

Private ownership of these animals still gives ample room for a risk, especially if the private owner in question is not educated enough about the animal they are caring for. And, considering the amount of dedication exotic animals require, there are plenty of chances to make a mistake that risks you or someone you know’s wellbeing.

Some places have begun restricting private ownership, like Houston, but situations like India’s still occur. Exotic animals and their care needs to be more carefully observed by the state so these things don’t happen again. Maybe the next time a tiger escapes onto a Houston lawn, we won’t be as lucky.